Sadly due to the fact my four year old knew there was a soft play around the corner I did not get much of a chance to really enjoy the experience of the Glasgow Angling Centre Open Weekend.

My idea of fun and his are two totally different things. Paul Young got him a shot in the police car which usually patrols the National Park however his look was enough to tell me he thought we were a bunch of boring old farts, I mean who wants to talk for gods sake when there is play to be had?

Still, I managed to run into some of the guys that I usually see however met no pals.

I watched the folk milling around and got the boy to hold on to my yearly stock up of stuff I need : two tapered leaders and some red mucilin. I also picked up some wee float things so I can cheat when using nymphs ..

There was one person I wanted to finally meet and it was Anne Woodcock of fishpal who I have been following on Twitter for a while now. She posted a very nice picture of us on Twitter. 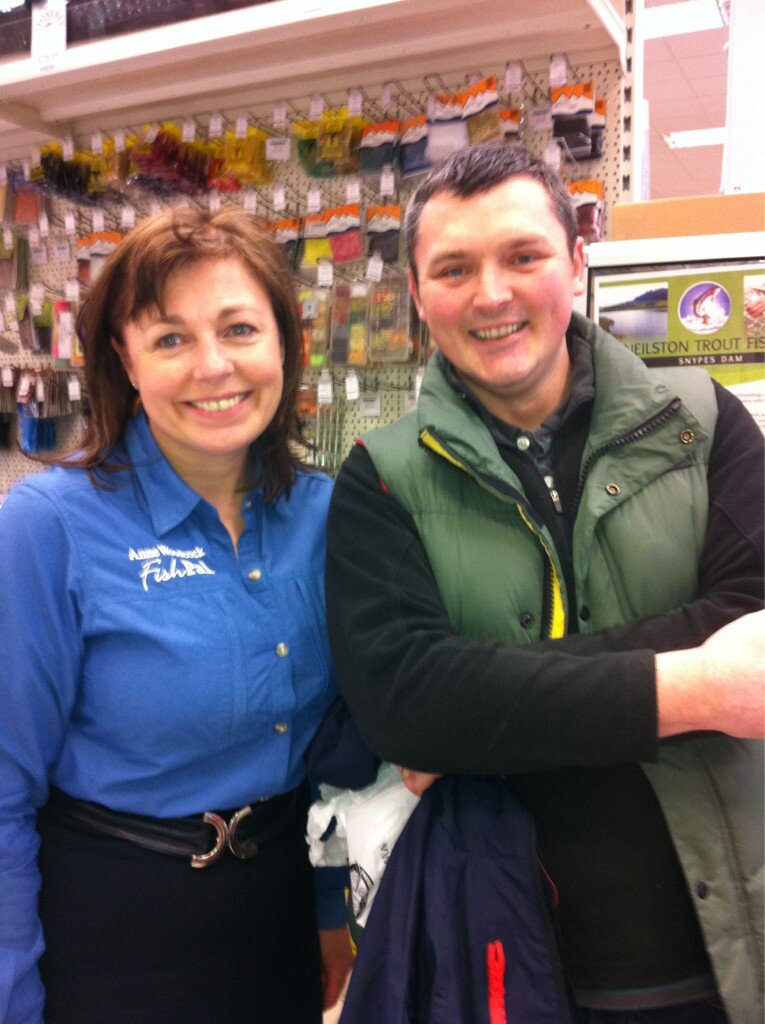 After I had another saunter around the shop it was time to head to soft play and then a jaunt up the road on the train with the boy. This was Saturday by the way and the day was lovely and Spring like, the temp was around 11 degrees (we are getting closer people) and I could swear I could smell olives.

Saturday evening was all about getting my gear out, swapping stuff from my old waistcoat into my new Patagonia waistcoat , opening up new spools of stroft and sorting out my fly boxes. I also sorted out new tapered leaders on to my old 4 weight Lamson in preparation for that first crazy outing of the year.

Sunday was another day just me and the eldest as the youngest was not well. One of the famous Kelvin work parties was taking place not far from my house so the boy got on his scooter and I got on my walking boots and we walked it down the canal and then along the Kelvin. After a while the tweeting of the birds was drowned out by the sound of chainsaws and I took the boy down a track by the river which soon turned into a newly formed path. Quite frankly it looked great as before you could not get down here without a bit of difficulty. I could tell that James Burns and James Crainey had a hand in this as those to guys are like the A Team of the committee – they have power tools and know how to use the shit out of them.

Suddenly I got a whiff of something in the air, nope, not raw manliness and testosterone from the guys with their chainsaws as in the picture…

Nope, it was the rather nice scent of garlic which totally covered the banks. I have a strong memory from the start of last season sitting in the sunshine waiting for something to happen among the garlic (nothing ever did) and it really is the herald of spring in my mind. The boy got in on a bit of the action as well, seeing as how I thought wielding a chainsaw would be a bit dangerous I allowed him to chop up some wood with the choppy cutter thing.

He has now done at least one half hour more work than I have ever done on a work party.

Of course the esteemed chairman Atkins was their with a bit of sweat dripping off his brow and was proud of it. So was another new member who just thought he would be doing a spot of litter picking and instead was hauling stuff out the river with a grappling hook.

Later we went for a walk down the river which was all a bit exciting as I had never seen it from this angle before.

Never seen from this angle!

I cannot remember whether that bridge is the old train or road bridge? I have crossed it a few times and suspect it is the old bridge that used to take the train from Partick to Possilpark many many years ago.

I was standing talking to Jim Burns when we both spotted our first trout rising of the season. Of course I looked up quickly just to make sure it was not in fact a bird poo however as their were none in sight it looks like we had a rising trout on the Kelvin today. Sure, it just rose the once and then disappeared however it was an honest to goodness trout rising so I am well looking forward to the start of the season.

Have you guys been preparing?

I really enjoy reading your comments - say something! Cancel reply

Connect with The Urban Fly Fisher on the cursed Facebook

Connect with The Urban Fly Fisher on the cursed Facebook